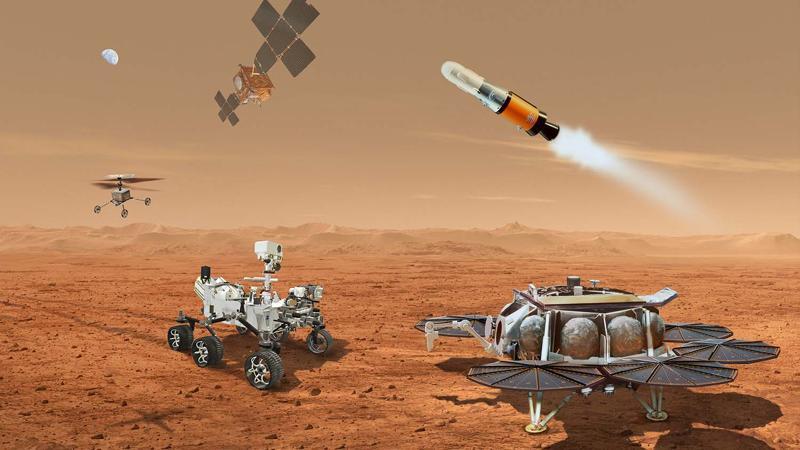 An illustration showing an Ingenuity-like Helicopter, the Perseverance Rover, the Mars Orbiter, the Sample Retrieval Lander and the Mars Ascent Vehicle. | Source: NASA/JPL

NASA is swapping out its Sample Fetch Rover for two drones, similar to the Ingenuity Helicopter, to serve as backups to the Perseverance Rover in the Mars sample return campaign.

The sample return campaign begins with the Perseverance Rover, which has already been on Mars for over a year and, at press time, had sealed 11 samples to eventually send back to Earth. NASA plans to launch its Earth Return Orbiter in fall 2027 and its Sample Retrieval Lander in summer 2028.

The lander is expected to make it to the surface of Mars in 2030. If all goes well, the samples should return to Earth in 2033.

The lander will carry two Ingenuity-like helicopters – the Mars Ascent Vehicle and the European Space Agency’s (ESA’s) Sample Transfer Arm. NASA plans for the lander to precisely land on the surface of Mars near Perseverance. The rover will then bring its samples to the lander, which will extract them using its arm.

Originally, NASA planned to send its Sample Fetch Rover as a backup to Perseverance, just in case the rover is unable to travel to the lander. Instead, NASA opted for two helicopters, each of which will be equipped with mobility wheels on its landing legs and one robotic arm. NASA told The Robot Report the image atop the page is the only image it has at the moment. If you zoom in enough on the image, you can see what looks

Part of the reason NASA decided to go with the helicopters over the Sample Fetch Rover was because of the size of the rover. According to David Parker, director of human and robotic exploration at ESA, the rover wouldn’t fit on the lander alongside the Mars Ascent Vehicle, meaning NASA would have to organize a second launch just for the rover.

This process could take four to five days per sample tube, with NASA expecting the helicopters to make round-trip flights of around 700 meters. While NASA isn’t ruling out the possibility of using the helicopters for other tasks, like observing the landing area or taking pictures of the ascent vehicle launch, its primary mission is to serve as a backup to Perseverance.

NASA sent its Ingenuity helicopter to Mars with the Perseverance Rover. As the first ever helicopter to be sent to another planet, Ingenuity was sent as a technology demonstration. NASA hoped that the helicopter would complete five flights, and today it has completed 29.

Once all of the samples make it back to the lander, the Mars Ascent Vehicle will take off from the surface of Mars. In the two-step launch, the rocket will be tossed into the air before it ignites to ensure the lander doesn’t slip to tilt out of place during takeoff.

The post Next-gen Ingenuity helicopters will have robotic arms appeared first on The Robot Report.

What Is Steer-by-Wire Technology?

Automotive tech is changing, and we’re moving towards semi or fully autonomous vehicles. Of course, drivers will have the option to shift between autonomous and manual driving when they want. However, for autonomous driving to Read more…

From Sticks and Stones to Steel and Code: The Rise of Technological Automation

Around 2.6 million years ago, our hominid ancestors picked up some stones and carved them out to make tools:  cutting, chopping, and hunting suddenly became less laborious. The purpose was simple; they wanted to minimize Read more…